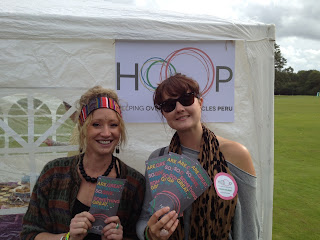 I returned from my trip in South America this summer. Back to creature comforts and my friends but also back to work and away from adventure. Whenever someone asked me my highlight – something that could be an impossible question, it was an easy answer. My time with HOOP at Flora Tristan School. The children I met there still pop into my head all the time. Since being won over by original Hoopers’ enthusiasm and admirable determination and work ethic, as well as the children’s chuckles and charms, I’ve been determined to continue supporting HOOP from the UK.

During one raucous fundraiser in Arequipa’s Wild Rover hostel I began racking my brain how more money could be raised and sounded my ideas out to wonderfully enthusiastic Priya. I decided to buy some beautiful Peruvian artisan goods while I was there to sell at a good profit in the UK. I was planning to go to a festival near Brighton the weekend I returned. It has a real hippyish, young family demographic and would’ve been perfect. I met Carmen at a wonderful shop near the plaza on one of my last days in Arequipa. The owner of the shop was a friend of Carmen’s and a keen HOOP supporter. She agreed to give us the goods at cost price to maximise potential profit.

I really felt like a kid in a colourful candy shop choosing how to spend my £50 budget (a kind donation from Pami Loomba) I knew so much of the stuff would be popular at home. My only restriction really was size. I was going to have to carry everything I bought in my backpack for five weeks through Bolivia and Chile so it had to be able to fit in and be stuff that would survive getting squashed! In the end I got adult and children’s stripy trousers, baby hats, baby booties in baby alpaca, pretty headbands and finger- puppets. It was amazing what a huge bag of bits I got for £50 (S200) and I was so excited by the potential I held, and also slightly terrified whenever I worried about losing/damaging/having stolen my bag or any of the contents! Anyway all was well and I arrived in the UK with everything fine, I did curse my ridiculously massive pack at times but all totally worth it! 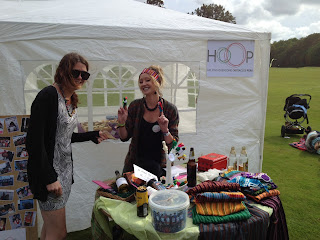 One of the best things about fundraising for Peru here is how far the pound goes. One of the things that struck me during my time at Flora Tristan was how easily pleased the children were, the value of a sticker, skipping rope or drawing was incredible. This is something I’ve been constantly reminded of by seeing kids argue over iphones etc here! So when I was worried about not raising as much as I’d hoped I’d just remind myself how far even £25 – S100 could go, towards an excursion for example or one of the things on the school wish list like a karaoke machine!

Anyway, the festival I’d originally planned to do the stall at was postponed and with work commitments I could not attend the new date. I started to worry about the summer ending and me missing any sale opportunities. Then a friend told me about Sparkfest, a little Devon family run festival in its second year happening in a couple of weeks. My evenings and lunch breaks were now spent making signs and price tags and preparing raffle prizes, exciting!!

Hollie Nolan, Sparkfest manager, not only let me have the pitch for free but also provided a table and gazebo so I could just rock up and set up my rainbow of wares on the day. The weather was beautiful, as were the golf course surroundings, the stall looked great and I was seeing sol signs in my head dreaming of how much I might raise. However, the festival was very, very small indeed, smaller than I knew and apparently down-sized a bit from last year. I had sold nothing but some finger puppets and a couple raffle tickets in my first two hours and was gutted and terrified of making nothing! My friends persuaded me to move my stall to outside where there were more people and that improved things and, never one afraid to Overcome Obstacles, I pestered just about every person in sight to buy a raffle ticket; I think the smiling faces of the children holding a ‘gracias’ sign on my collection bucket really helped!

People who I spoke to were kind and interested and I managed to raise some awareness of HOOP! The raffle was announced from the stage at the end of the afternoon and the lucky winners had prizes of a meal for two at a local Spanish restaurant, and baskets of South American coffee, chocolate and wine. Though I hadn’t sold everything, and had slashed my prices a bit to make sales, I felt happy and relieved. The people who had bought things had loved them, the people who had asked questions about the Flora Tristan Community and work of HOOP were touched and impressed by what they heard and I had a total of nearly £300! Over S1200!

Some advice I can give to any other Hoopers thinking of doing a fundraiser: As Priya wisely told me, everyone loves a finger-puppet! They’re great fun and good gifts and at only £1 people will buy one just to make a donation. Also I highly recommend doing a raffle; when I was worrying about not selling anything it was a constant positive that I was selling raffle tickets bit by bit. As my friend who recommended doing one told me, the beauty is that you can sell an infinite number of tickets for one (ideally donated) item.

Next summer I would love to do the same thing on a larger scale, like the original festival I planned that has 3000 people – imagine all those raffle tickets! I have the signs and stuff made now so will be prepared for any HOOP event again!! Will just have to ask Carmen to send me some more stock, or preferably return to Arequipa and get it myself! I guess the most important thing is that small efforts can make a big difference and slowly but surely HOOP will go global!

Joined efforts bring us a world of clean, safe and fruitful living