Squinting into the reflected sunlight on the bus windows I can just about make out the words “Villa Fontana” printed in an elegant typescript underneath “Villa Paraiso”, “Saga” and “Metro” – other destinations displayed in the windscreen. Waiting with me on the corner of the street, also known as the ‘bus stop’ boasting no label nor sign, tall Austrian Miriam expresses her simple desire that perhaps today, for our half hour commute to the English school, we might be lucky enough to catch a bus where there is enough headroom to stand up straight…wishing for more than that, a seat for example, would be wasted fairy dust.

We flag down the bus, a slightly oversized VW campervan-type vehicle, and the man hanging out of the door bustles us on. “Avancer avancer!” He urges us and the people clustering in the middle aisle to move up. Ok, so some will move, some won’t, just like the variation in attitudes back home on London buses…but what’s completely different is that here in Peru its perfectly acceptable to barge your way through a non-existent space to get to a partially-existent space and make it your own by leaning into and up against whoever is nearby, even those sitting down, and grabbing with both hands the ceiling rail that is mercifully (for shorties like me) within reach. The beautiful thing is the silence that accompanies such an awkward move – the usual “tuts” I would expect from Brits are conspicuous by their absence and no-one bats an eyelid. In fact, many have their heads bowed in a nodding snooze as the soporific sunlight amplifies through the windows and sends them off into dreamland.

Sadly for Miriam the probability of this being a bus with height is somewhat negligible but she manages to bag a seat at the front. These seats are often free because the innate politeness in the Peruvian consciousness leaves them empty for mothers with babies, senior citizens and anyone with problems standing. Indeed, when one of the aforementioned board the bus the door guy politely requests in his penetrating monotone that those occupying the premium seats should make one available: “un asiento por la Senora por favor, por favor un asiento”.

Now that my Spanish has improved somewhat I can better understand the chatter between the driver and the man at the bus door. The former mostly remains silent, apart from the odd question to confirm if there are definitely people getting off, and the latter is almost continuously chattering – he informs pedestrians of the destination “Sagaaaa, Villa Paraiso, Fontana Fontanaaaa”; tells the bus driver there are people getting off at the next corner “baja esquinaaaaa, baja bajaaaa”; gets the driver to set off again “vamos”; requests payment and incessantly urges people to move up, board quickly, alight quickly and make seats available for those less able to stand.

To begin with it seemed excessive that there was a driver and a door guy (or lady) but by now I can truly see the point – the driver has more than enough to do to keep the bus from careering into other vehicles (there was one journey home where two buses bounced off each other when cornering simultaneously and rather too quickly) and taking the corners with such precision that I’m sure there is little more than a centimetre between the wheels and the curb. On a practical level the vehicles themselves don’t allow for passengers to come anywhere close to the driver, unlike in the UK where you board and pay the driver first. Instead the driver stays hidden away in the front corner and door guy possesses an amazing power of memory to know who has paid and who has not, even when faced with a bus bursting at the seams with passengers. 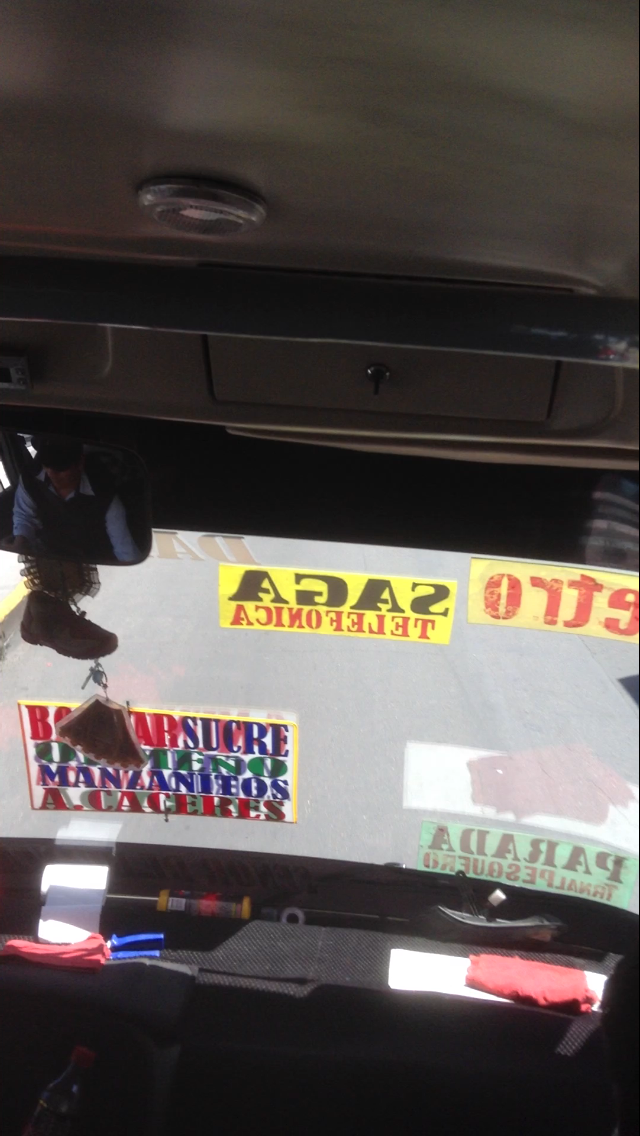 The emphasis is on speed so they can get to as many bus stops as possible within the time available in order to collect the most cash. The driver’s main tasks therefore are to stop for as little time as possible and to accelerate rapidly between stops. The door guy’s job is to make sure the people boarding and alighting the bus do so quickly and safely (i.e. without getting run over).

It’s a game of tiny margins and precision timing – I’m now more used to starting to get off the bus while it is still slowing to a halt. I have faith that it will have stopped by the time I reach the last step and this is invariably the case. I’m now more used to the bus behind me immediately setting off at a pace a millisecond after my feet touch the pavement. I’m also highly entertained and impressed by the athleticism of the door-guys/girls who frequently throw themselves off the moving bus, sprint into a shop to presumably record their passage through this part of the route or perhaps collect money, and then sprint back and leap onto the bus. All this time the bus has continued to move so is often 20 metres or so further down the road.

I’ve seen the door guy help mothers with their children, assist with shopping bags, lift a schoolgirl’s bag of books up the step for her. I’ve also seen one violently throw a drunk off the bus and kick him to the dirt.

A common sight is someone getting on the bus and addressing all the passengers – he or she more than likely is selling little chocolate-covered marshmallow balls for the delectation of anyone who wants one and to try and make a modest living. Many Peruvians reach into their pockets and buy something – the price is nominal, the equivalent of a few pence, yet several people per bus making a purchase might mean the difference between getting a meal today or not.

Another thoroughly entertaining bus-related occurrence is the buskers. Two of them board – squeezing in with their instruments amongst the uncomplaining passengers – and they do their intro spiel: “We’re from Argentina and…… (my Spanish fails me at this point).” However, no Spanish is required when they start their merry serenade – perfectly harmonious and upbeat to bring a smile to many faces. I managed to film them so hopefully you can see the video below…and of course I gave them a sol for the welcome tuneful diversion.

I can honestly say that I really enjoy the bus journey to school. It’s one of the many things that I find thoroughly and endlessly fascinating about life here. Sometimes it’s hot and cramped and uncomfortable; it is always dusty and smells faintly of feet…or dung…or dirt…or sweat; sometimes I have to stand the whole way; sometimes seated I have leg room; sometimes I’m curled up in a ball with my feet crowded out by the wheel arch; sometimes I sit facing backwards on the step that forms the foot rest for seats close to the front; usually, even when seated, I am up close and personal with someone I don’t know. Occasionally I get the luxury of the front seat next to the driver, which I find incredibly interesting, watching how he skillfully takes the blind corners and junctions without a flinch, even when another vehicle is coming at him head on.

I love to observe the people who get on – mothers with babies, elderly women with heavy shopping bags, businessmen, teenagers in their school uniform blasting out tunes on their radio for all to hear, young couples helping each other stand up as the bus swings and jolts, people in traditional clothing, workers from the mines, dolled up girls, tired-looking housewives on errands, a nurse, a nun, a vendor of miscellaneous wares, friends of the driver or door guy who might also join the hanging-out-the-door party, students with an armful of notebooks.

Every bus plays music on the radio – it’s unusual for the growl of the engine to have nothing to compete with. Sometimes the music combines with the struggling engine’s roar into a background stream of indistinguishable white noise. Sometimes, especially in the evenings, a single blue light glows close to the driver and the music blares like some kind of fiesta-bus. My fondness for latino beats has been somewhat enhanced by this continuous presence of music and I sometimes wish they would turn up the volume. Sometimes however, I just want to listen to Lady Gaga or Incubus or Foo Fighters so if I’m lucky enough to sit down I whip out the iPod and sink into my own little world.

Finally, after the traffic of the main street, the tight corners of the suburbs, the stadium, the swimming pool and the barbed wire airport fence, we arrive at the dirt track that is the signal to ready ourselves for our own shout of “baja baja esquina”. Flora Tristan’s mountainous surroundings and chilly air greet us and out come the excited butterflies in my tummy – I can’t wait to teach my lovely class.