My most enduring memory of the Peruvian rock festival Vivé Peru is of being utterly and completely iced to the bone. I don’t know quite how it happened. I am well aware of the change in temperature that occurs between night and day in this city of 2,328m altitude so I should have come prepared, but somehow I still had to jump up and down continuously in order to regain some semblance of feeling in my feet. To be fair, I was wearing six layers of tops, t-shirts, jumpers, jackets, but it was my legs and toes that were cold inside my paltry one layer of jeans and socks…next time I’ll wear my thermals.

But I didn’t go home early. I didn’t want to. Because Peruvian rock is actually really good. Good enough to keep me there, freezing my proverbials off until the icily small hour of 3am.

I found out about this music festival through an advert on Facebook posted by the lovely people involved in the Couchsurfing network – people who host travelers on their couches in return for the simple enjoyment to be had in finding out a bit about the rest of the world through the eyes of their visitors. A bunch of people who, on the whole, will bend over backwards to make you feel welcome in their city and spend their free time coordinating language exchanges, bike rides in the countryside, trips to off-the-beaten-track sites of interest, to local communities to provide free healthcare to those in need, to the inaugural concert of the University’s philharmonic orchestra and of course to rock concerts…among an array of may many other things.

Being an enthusiastic festival-goer back in the UK and lover of pretty much all live music, when I got wind of this gig I figured that it would probably be up my street. I coordinated with Tom and Mauricio to get my ticket and checked out the links to YouTube that were posted on Facebook to sample the ambient (and not-so-ambient / rather heavier) Peruvian rock tunes that would feature at the concert. At least 18 bands were in the line-up so I could only listen to a few of them before the concert but the ones I did sample were on the whole rather good…I was particularly looking forward to seeing the interestingly-named Libido and Tremolo and the slightly less imaginatively-named Miki Gonzales and Daniel F.

Later on in this post I’ve included some links to the music on YouTube so you too can listen and enjoy! Here’s a link to the overall line up if you’re interested:
http://www.cuadra7.com/2013/10/06/viva-peru-arequipa-2013-agenda/

Before the festival I also listened to some of the catchy tunes of rock star Pedro Suárez-Vértiz.

He can no longer grace Peru with his dulcet tones due to a throat problem and so didn’t play at the festival himself. However, he is a legend in these parts: pin-up boy, musical talent and commercial success in the 1990s. This concert, Vivé Peru, was a homage to him and a celebration of what is genuinely an impressive Peruvian rock scene – Peru being where allegedly rock in Latin America arguably started its life in the 1960s.

As it turned out, much to my relief, Tremolo, Micky Gonzales, Daniel F and Libido were all worth the hour and half in the epic queue and the eight hours of standing around in the night-time mountain chill.

Tremolo were heavy and contemplative, reminding me a bit of some bands I listen to back home.

Miki Gonzales threw out a happiness vibe that got everyone singing along – even me, with a little help from my Spanish-speaking companions and the useful fact that the lyrics weren’t really too hard to master!

Daniel F gave us the pleasure of his voice and guitar, both excellent and again with plenty of songs that the crowd could sing along to. 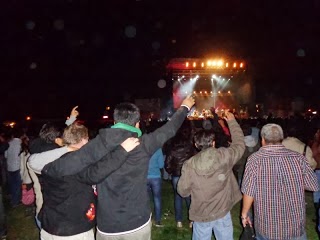 Dinero were a fun and bonkers interlude – Arequipa’s most successful home-grown band – their Muppet themed costumes starting their set on a hilarious note to compliment the wacky ska-influenced bouncy rhythms. I think they may have had a little bit of Arequipeñan beer before coming on stage but it didn’t matter, it added to their “loco” approach, the crowd loved them and sang along to every song word for word.

The biggest revelation for me was Uchpa, checkout their video below. A group who sing mainly in the indigenous language of the Andes – Quechua – understood by a rapidly diminishing number of Peruvians. They combine ponderous, soulful Andean melodies, traditional instruments and distinctive tongue-contorting Quechuan syllables with rapid rock riffs and power drumming, resulting in something all at once strangely heady, enchanting and energizing. They also have the added element of splendid traditional outfits and dancing to get the crowd suitably worked up.

The endurance test was the wait for Libido. They were preceded by a number of bands who, although high quality in vocals and instrumental talent (namely Amen and Zen), slightly overstayed their welcome and dragged out their sets just that little bit too long to keep the crowd on their side…there are only so many guitar and drum solos one can handle when one’s toes are on the verge of frostbite. Finally, Libido came on.

They delivered rich melodies and intense percussion overlaid with the lead singer’s fascinating voice and for 20 minutes I forgot about my chilled bones and grinned. Only five songs due to the over-run in the timetable but it was worth it. When they finished we made a dash for the comfort of a taxi and once my body had defrosted, my mind replayed the best tunes of the night in a curiously comforting Peruvian rock n’ roll lullaby.

See how you can get started volunteering with HOOP Peru here.

Jess taking on the Butterfly class

How I got HOOPed into charity work in Peru

Spanish words that have no English translation

A year ago today, HOOP was celebrating its 7th bir